Posted on December 17, 2011 by Elaine Taylor-Klaus

I’m not sure which of us feels more proud, my 10 year old son, or me. We did a good deed today. My son kept saying, with glee in his voice, “it’s like our own community service project, mom!” He was jubilant and excited. It felt great.

Synchronicity handed us an opportunity for service, and learning – and we took it, together. It was a powerful experience for each of us, for very different reasons.

On a morning outing to a state park, my son led me to an area he remembered from a school trip. His plan was to play in the water and on the rocks, and my job for the day was to follow his lead. As my youngest child, he rarely gets my undivided attention to do whatever he wants. It was our special day. My son was in heaven.

We had made it most of the way across the river when I spotted the ugly, racist graffiti – the letters “KKK” — painted in black on the edge of a rock by a small shoot of rapids. I was horrified, and immediately found a small rock, crawled around to the painted area, and started scraping it away. He came to my side and we chatted while I worked. I explained to him what the letters represented, and why I found them so offensive. 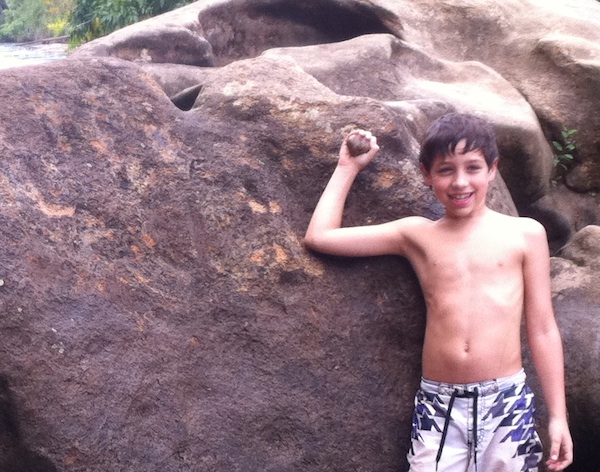 Proud of himself after removing offensive graffiti

When we looked up, there was more graffiti on a rock initially out of view. It had even more disturbing language, and was much harder to reach.

He understood the situation. He stood up, searched for another small rock, climbed to the other boulder, and got to work. We had to lean way over the boulder to clean it effectively, holding each other’s feet. He even climbed into the icy-cold rapids, his wrist secure in my grasp — to get to the bottom part. He got scraped and bruised. And though he often whimpers at the slightest scrape, he brushed off the pain and continued his task.

Now, this child is not exactly the first one to volunteer for any work duty. He has to be cajoled to get groceries from the car, he whines if asked to get a roll of toilet paper from another bathroom, and he leaves a wake of discarded clothes and shoes wherever he goes. But today, he not only engaged, he did it with clarity and vigilance. He knew what was important about the task. He owned it.

The gifts for me in this are too many to list, but I’ll hit the highlights. I had a willing companion in doing the right thing, I had a chance to teach a valuable lesson without lecturing, I got to practice what I preach (and have it work!), and I bonded with my son in a way that even I’m likely to remember 20 years from now. Over the course of the morning, we engaged others in the deed by modeling responsible citizenship. My son saw the potential of his own leadership.

Walking away from the beach, back toward our picnic spot, we stopped and spoke with an African-American family with three small children. As we moved past them, my son smiled and said, “I’m glad those kids can go to the beach without being traumatized, mom.” I smiled in response. Wow, sometimes kids really get it!

One thought on “Proud of Ourselves: the Story of a Mother and her Son’s Community Service Project”