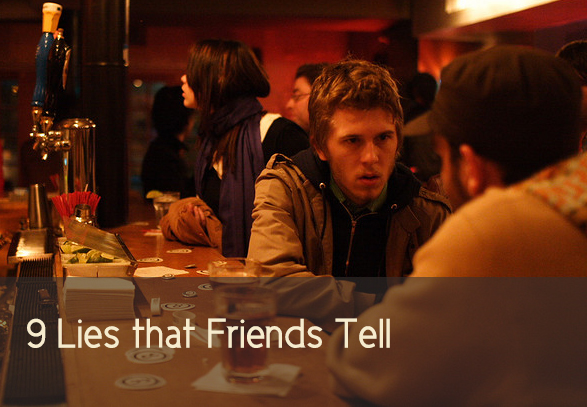 image by ALEX CHECKALAYIL adapted for use under creative commons

Have you ever had a conversation with a friend and wondered to yourself “I wonder how much of what she told me was really true?”  Well here’s a list of the nine lies that friends like to tell.

What are those, you ask? We’ve been sworn by secrecy by the CIA, NSA, Mi6, and the Public Library not to reveal them, but for you, we will.  You just can’t leak this to my KGB contact.

Let’s face it; this is the easiest area where to lie.  If your friend is a guy, the real number is going to be less than what he tells you.  If it’s a gal, it’s going to be more than what she is telling you.

2. Your choice of clothes

Your friend is may notice that your purple shirt do not go with those plaid pants, but instead of warning you about your impending disaster, they’ll be more likely when asked to say, “That looks great.”

3. What their job really entails

Your friend tells you that she just got a job as the Office Manager for a prestigious downtown law firm.  In reality it’s more than likely she is filing memos and faxing documents for a single practice attorney who’s just getting started.

4. What their significant other really does

Similar to #3, the status of one’s spouse or boyfriend/girlfriend has a tangential reference to their own self-worth.  Who wants to tell a friend that your wife works as a night janitor in a university building when you can say that she is “Assisting with a team of researchers at a University to come up with a cure for cancer.”

5. Why they couldn’t hang out with you

“Sorry I couldn’t make it last night, I had family commitments” is usually more like “My wife really would prefer that I don’t spend time with you because she’s afraid I’ll turn out just like you.”

6. How much money they really make

I don’t care how good of friends they are, I doubt they are going to be sharing their pay stub with you.

7. Who they really know

When they start telling you what a wonderful childhood they had with the perfect mother and father, wonderful siblings, and a comfortable home, it’s time to start putting the truth radar up.

9. What they think of your significant other

Yes your friend may be married to slob who hangs around in a wife beater t-shirt and hasn’t bathed in a week, but you’re more likely to tell your friend “He seems nice” instead of the truth which is “What did you see in that doofus?”

The real truth is that your friends have a lot at stake and a lot of reasons to stretch, hide and avoid the truth. There is a big difference between a toxic friend and a well-meaning friend who can’t deliver the truth.

If you are being fed lies by a friend, remember:

1. To compare is to despair

Your friend’s version of their reality will be skewed. Try to understand why you are trying to relate with your friend’s experience or input: are you looking for validation, comfort or are you trying to measure up? Start with your own opinion, and be careful who you ask for input from.

2. Your friends don’t want the best for you

They want the best for themselves, in their relationship with you, and that may be completely different that what is truly best for you. It might be best for a friend for  you continue what you are already doing because changing may disrupt the friendship! If you are looking for a champion that truly wants the best thing for you, hire a coach to push you to make the important choices.

3. All friends lie and it doesn’t matter

The reason for lying may not be malicious. It could be embarrassment, or wanting to protect you or your feelings. Your friends are human and fighting the same battle to change, live fully and thwart low-self esteem, so unless it is a toxic friendship, you might want to let it roll.

4. Be your own friend first

Sometimes we catch our friends during times that they are able to be there for us, when they don’t have a lot going on in their own lives which makes it easier for them to be accessible. Be your best friend and check in with yourself first before accepting other people’s opinions, perspectives, and beliefs. By learning to become your own best friend, you will be able to connect better with others.

One thought on “9 Lies That Friends Tell”