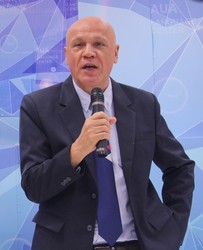 I'm looking for SME business owners who want to change the way they are doing things now, so they can spend more time working on their business, rather than in their business.
Request Free Consultation

Over the years Dave has worked in many different business sectors, from retail, to engineering to catering. He is also a keen music lover, musician and songwriter, which eventually led him to start his own record label in London.

After ten years in the music business and many successes, Dave felt it was time to move on. He went back to University and took up a career in Lecturing and Training, gained an M.Sc in Information Systems from City University along with numerous teaching qualifications.

From training Dave went into the corporate world as the European Training Manager for a Global ISP based in Amsterdam, Holland. There, he took the training department from nothing, to a point some five months later where people were saying there was too much training. After that, Dave took on a role within the same organisation as Senior Project Manager, implementing multi-million pound projects across Europe.

After that he bought a franchise with Action Coach, a global leader in helping business owners overcome the challenges in maintaining a business. Dave spent two years in England working as a Business Coach where he helped many business owners achieve their goals.

Originally from London, England, he is now living in Bangkok, Thailand, where he has been working as a manager for an English Language School. In his first year in this job, he increased student numbers by 26% and took the profit from a negative to a positive number.

Dave has a passion for coaching and for helping businesses to succeed and reach their true potential. He believes “We all know what we should be doing, so why aren’t we putting this into action, which is why every business owner needs a coach.

Have you worked with Dave? Tell your friends!

Dave doesn't have any reviews yet.