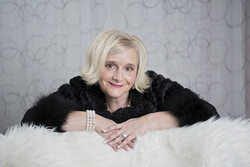 I help grieving clients that have lost a loved one from a sudden and traumatic loss. I also help clients experiencing grief from break-ups, anticipatory grief & job loss. I help rebuild lives.
Request Free Consultation

Linda Marshall is a dynamic entrepreneur who helps people work through grief. She is an Author, Grief & Life Coach, Trainer, Advocate for Mental Health, and Hypnotherapist. She is a passionate trainer and speaker who spends her time teaching suicide intervention (ASIST) to students, first responders, military, health care workers, teachers, community volunteers, or anyone who wants to be a helper. Linda lost her first 13-year marriage and father to her two daughters, as a result of living with a husband for several years with drug addiction and alcoholism. Eventually she found the strength to leave, and went on as a single parent working in a low paying job, and going to university at times full-time to graduate in Business Administration, which she eventually did in 2002. Linda received an Adult Learners’ Award in 2001 for Atlantic Canada.

Linda and Barry became a couple in April 2000. In 2004, she moved herself and her two daughters to Ontario Canada where she, Barry, and her daughters started a new life together. Linda grew her career in Business Development in Ontario eventually hitting an Executive level position, winning the President's Club award for 2010. With her success, came a low that was beyond words for her to describe. The family tragically lost Barry to suicide on February 17, 2011. This was the day that everything changed and once again she was faced with a journey of recovery, survival, and rebuilding.

This changed everything, including her direction in life. Linda is now a Grief & Life Coach (Certified Heartbreak to Happiness Coach, Grief Coach Academy) Author, Speaker, Hypnotherapist, and ASIST trainer. She remarried 2014 to her wonderful supportive husband Jon, a Military Veteran of 24 years and lives happily in Hammonds Plains, Nova Scotia running her private practice and writing.

Have you worked with Linda? Tell your friends!

Linda doesn't have any reviews yet.