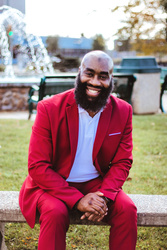 I help couples and singles work through relationship issues and Get Their Groove Back.
Request Free Consultation

Louis Morris’s journey to coaching began when he was just 13 years old. With a listening ear and a wisdom beyond his years, people in the
neighborhood came to him sharing their struggles and seeking his advice.

Being the only boy raised with 4 sisters and a very spiritual mother, his insights on relationships were informed by an appreciation for both the male and female perspective. At a young age he understood the importance of cultivating a harmony between the two sexes.

It is his belief that through faith in God and effective clear communication, there is nothing that two people cannot achieve together. It was in 2017 that Louis was first introduced to Life Coaching. It became clear that this profession gave him a chance to do what he’s always wanted to do.

Life Coaching enables him to put his natural gifts to use by helping the spiritual couple overcome any obstacles they might have in their relationship. He pursued Certification for Professional Life Coaching, and
received his Certification on May 18, 2018.

It is his mission, through his podcast, relationship books, and coaching programs, to help spiritual couples improve their faith and strengthen their relationship so they can live a joyful and fulfilled life.

Have you worked with Louis? Tell your friends!

Louis doesn't have any reviews yet.