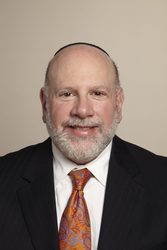 Doctor of Ministry in Pastoral Counselling, Board Certified Chaplain, Rabbi

I help: people living with serious illness, their caregivers and loved ones; people who have experienced the loss of a loved one; healthcare workers traumatized by their work, LGBT people with coming
Request Free Consultation

H. Rafael Goldstein received his Doctorate in Ministry in Pastoral Counseling from Hebrew Union College/JIR in 2014. He was ordained by the Academy for Jewish Religion in New York in 1994, and is a Board Certified Chaplain with both Neshamah: Association of Jewish Chaplains and the Association of Professional Chaplains. He is a Mentor for Personal and Spiritual Transformation and founder of Dynamics of Hope Consulting, which provides workshops for people living with serious illness, health care and social service professionals working with people living with serious illness or loss.

Rafael served as the Director of Clinical Services for the Center for Spirituality and Health of the Mount Sinai Health System in New York City. Under his leadership at Mount Sinai, the department grew from just one chaplain and one priest to over 35 staff people, including chaplains, Clinical Pastoral Education (CPE) supervisors, CPE fellows, residents and interns and other staff. The number of people visited annually grew from under 1,000 to over 45,000 in 2015. Referrals from other health care professionals, especially nurses, grew from less than 100 annually to over 3,500. Under his leadership, the department went from being notably inadequate to to becoming known as one of the best in the country. Rafael participated in significant research in chaplaincy, wrote a peer reviewed article, participated in 3 other peer reviewed articles, and authored a chapter in a major textbook on chaplaincy.

Rafael served as the Vice President for Jewish Affairs of Jewish Family and Children’s Service in Phoenix, AZ. He was the founding Director of the Center for Life Enrichment, which provided social service and counseling programs for the Jewish community. Prior to Phoenix he was the Chaplain of the Jewish Community of San Diego for 7 years, and Chaplain of the Jewish Healing Center of San Diego. He served as the Director of Los Angeles Jewish AIDS Services from 1995-1998.

Have you worked with Rafael? Tell your friends!

Rafael doesn't have any reviews yet.

Torah in the Key of Healing

Weekly thoughts on the Torah portion, Biblical or holiday readings.