Coaching Maturity: How A Coach's Capabilities Evolve Over Time 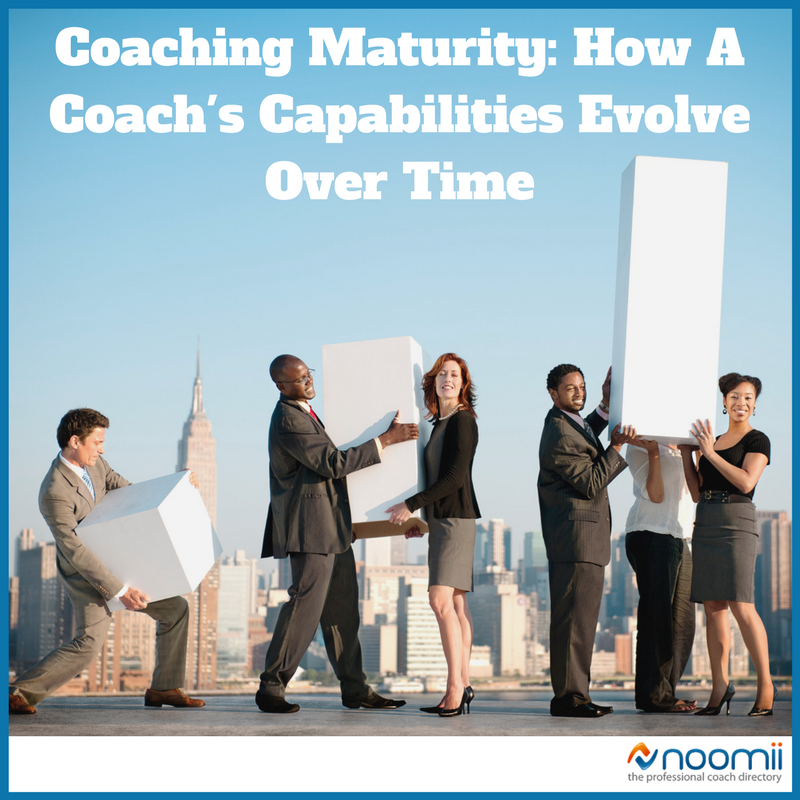 This is a guest post written by Revel Gordon. Want to contribute? Check out the 2017 publishing calendar.

I was fortunate enough to spend time one-on-one with professor David Clutterbuck at the International Coach Federation Australasia Conference. We chose David as one of the conference’s keynote speakers in recognition of his towering contribution to the coaching and mentoring industries for over three decades - He co-founded the European Mentoring & Coaching Council in the 1980’s and has published over 50 books on coaching and mentoring. Yet it was one of Clutterbucks latest pieces of research that really hit home for me at both a personal and professional level — his coaching maturity model.

The model describes the stages that coaches progress through as they grow in experience and proficiency:

As he explained the model, it was as though my coaching journey snapped into focus, with specific examples from throughout my career coming to mind that aligned with each stage he described. Clutterbuck’s model simply makes sense.

Most coaches start their coaching journey having attended a course or seminar, where they learned a coaching model or two, often GROW (Goals, Reality, Options, What next) and one of its many, many linear derivatives. The questions the coach is typically asking him or herself at this level is: “How do I take the coachee where I think they need to go?” and “How do I adapt my technique or model to this circumstance?” Professor Clutterbuck describes this coaching style as one of ‘control,’ as the coach is constrained by the limits of his or her competence and experience.

I remember pacing around as I ‘prepared’ for my first ever paid coaching session 10 years ago and thinking to myself, “What questions should I ask this coachee?” “What do they need to get out of this coaching session?” and “What tools do I want to use today?” Reflecting back, it was classic stage one, models-based behaviour.

As coaches grow in experience and capability, they reach the process-based stage of coaching maturity. At this point, the coach has a few more models and tools available to them that they are confident in applying, but still has a somewhat limited perspective. For example, a solutions-focused approach assumes that the coachee is seeking a ‘solution,' whereas in reality, many coachees are simply seeking a deeper understanding of their current situation and/or coming to terms with a situation that may be inherently insoluble at this point in time. A psychodynamic coach may wish to understand a coachee’s deeper motivations and how their subconscious impacts their behaviours, yet this is not something that every coachee will wish to explore, nor is it always the most effective approach to take.

A few years into my coaching career, I recall working with a senior executive in China who was facing a vexed situation. No matter which way we sliced and diced the problem he faced, there were no good solutions. It became clear that his situation was being impacted by forces that were not only beyond his control, but that were opaque to both he and I and were likely to remain so. I spoke about this with my supervisor, who pointed out that I was being held hostage by a (misguided) belief that it was somehow my responsibility to help my coachee ‘solve’ the problem he faced. That conversation changed my perspective on my responsibilities as a coach (and, not coincidentally, improved the quality of my relationship with that particular client!) It also reinforced to me the crucial role an experienced supervisor plays for any coach who takes their professional development seriously. (It should be noted Clutterbuck’s research has found that almost every system-eclectic coach takes supervision seriously).

As coaches flesh out and expand their coaching repertoire, they have a wider set of capabilities upon which to draw, though they may still have an overarching philosophy to their coaching that colours their approach. At this stage of development, the coach takes a more facilitative style and is asking her- or himself questions such as, “What can I do to help the client do this for themselves?” and “How do I contextualise the client’s issue within the perspective of my philosophy or discipline?”

While highly competent, philosophy-based coaches can sometimes still come across as mechanistic, as they seek to ‘fit’ the client’s situation to their preferred frame(s) of reference.

The final stage of coaching maturity under Clutterbuck’s model is the systemic-eclectic coach. At this point, the coach is able to let go of preconceived models and approaches and simply ‘be’ with the coachee, trusting that the right issues and paths forward will emerge through dialogue. The coach takes an enabling style and is asking her or himself questions such as “Do I need to apply any techniques or processes at all? If I do, what does the client context tell me about how to select from the wide choice available to me?”

Coaches at this stage also start to develop their personal philosophy on coaching, as they reflect upon and integrate a wide range of perspectives into their practice, many of which have little formal connection to coaching literature per se. Paradoxically, Clutterbuck also points out that systemic-eclectic coaches become increasingly aware of just how much they don’t know, which is an observation that really resonated with me. In a transition that parallels the stage four and stage five shift within Professor Robert Kegan’s adult developmental theory, systemic-eclectic coaches start to question their own beliefs and assumptions and embrace the ambiguity and uncertainty that comes with this.

One of the elements of Clutterbuck’s model that I most applaud and which he arrived at through observing the most proficient coaches in labs, is the explicit recognition that the best coaches have a contextual understanding of the client’s world. Coaching does not happen in a vacuum. If an executive coach does not have an awareness of the realities of the corporate and business world, they increase the potential of placing their client at risk and also limit their own capacity to add value. It is possible to be a solid executive coach without a business background, but not a great one.

A ‘purist’ view is that coaches just need to know how to “ask great questions.” Clutterbuck calls this “one of the most pernicious myths in coaching and one that is born either of self-aggrandisement or a highly mechanistic view of the coaching process”. I wholeheartedly agree with Clutterbuck’s position. The best coaches I know all have an intimate understanding of the realities of the business world (though not necessarily with the details of the client’s particular role or area) and explicitly incorporate this understanding into their personal coaching approach.

Coaching mastery is like the horizon: no matter how far we travel, it always remains elusively beyond our reach. Clutterbuck’s model of coaching maturity provides a sense of the journey that we take as coaches and allows each of us to consider how far we’ve come and, perhaps, how far we still have to go.

Revel Gordon is a Sydney-based executive coach, team coach and leadership expert. He is also a Director of the International Coach Federation Australasia.

Sairamesh Govindaraj MCC over 4 years ago

Thank you for your wonderful commentary on the coach maturity continuum and the personal experience that you have shared. The goal for every coach should ideally be to move to the 'Systemic Eclectic' stage, learning to leverage & integrate from multiple human developmental practices that life has taught and not to be stuck in models and personal philosophies. What I particularly liked in David Clutterbuck's & Robert Kegan's work has been the ability of humans to discern Subjectivity & Objectivity, and the need for migration to Objective Consciousness - this in a way talks about the need to unlearn the old and learn the new.

Last but not the least, the matured coach is one who is able to choose in the moment in relation to the context and be at ease and work with grace on the presented situation by the client.

Mahesh Thakur over 4 years ago

KISHORE KAPOOR over 4 years ago

Coaching is a Practice which is evolving and getting enriched each day. If we see ancient Indian heritage Mentoring from wise one was so integrated to the culture. I have interacted with so many people in all fields ( some call themselves Coach, others are known simply by their name or profession) where 10 minutes of Focused talk gives breakthrough. Models are limiting and letting you be Model not YOU. Being true self for Coachee and Coach is key.

Revel Gordon over 4 years ago

Thank you for the positive feedback, Sairamesh, Mahesh and Kishore. Sairamesh, I agree that the subject/object shift is incredibly powerful. Helping people to understand the assumptions to which they are subject, and helping them to broaden perspective taking capacity can be transformational. The subject/object interview or tools such as The Leadership Circle can be helpful in this area, though - in line with the systemic eclectic coaching perspective - this topic simply emerges in conversation.