Thoughts Leadership: A Powerful Tool for your Coaching Brand Promotion 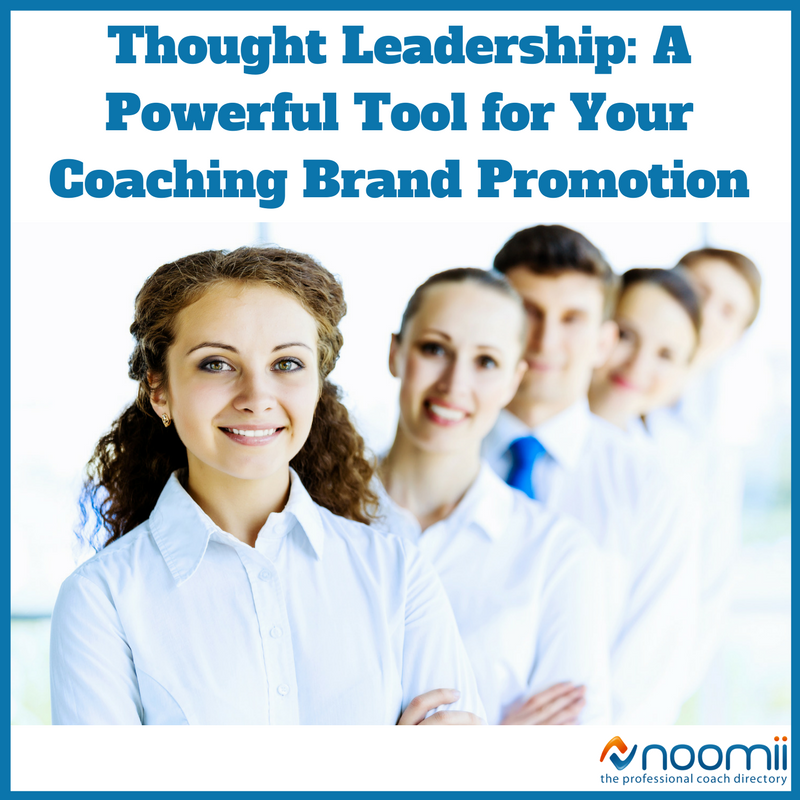 The internet has given companies an incredible platform to promote their brands and build a company which doesn’t just sell products but values, lifestyle and a belief system as well. And that matters, as most modern-day shoppers no longer see companies as providers of goods, but also as entities in their own right. They want companies to take a stand on environmental and social issues.

Of course, the problem is that while one group might want you to go in one direction, there is almost always another who would prefer you look the other way instead. For that reason, many companies seek out ways to sidestep these prickly problems and instead define their brands in different ways.

One of the best ways to do that is through thought leadership.

What is thought leadership?

In a nutshell, a thought leader (also referred to as an influencer) is somebody who forms the opinions of the field that they work in. They’re well respected by their peers and followers for having a set of well-considered and in-depth positions on a specific area or expertise.

Yes, you did read that correctly. Generally thought leaders are individuals. This is because though we like brands, we still feel they can’t really have thoughts. Only the individuals who work inside of them can.

For this reason, thought leaders – though associated with a brand – still have their own voice and their own identities. One of the most famous thought leaders in our times was Steve Jobs. His insights into the industry and his ability to push his entire industry in new directions made him a household name that became synonymous with Apple design.

Do note, thought leaderships is most certainly not only something you see in B2C businesses. In fact, it is more common and easier to implement in B2B businesses. Largely, this is because most businesses don’t just buy products because they like them, but because they have considered what they mean and how they will benefit their business.

How do you create thought leadership?

There are several important things that you’ll need to consider before taking the plunge into creating thought leadership for your coaching brand.

Note, you don’t have to do it alone. In fact, that is probably asking too much. Nonetheless, they will be the face and the voice behind the effort. Note that in order to be a thought leader, you have to be charismatic and well-spoken. If you need to brush up on your confidence and public speaking skills, there are plenty of tips online to help or you can hire your own coach.

As for what you’ll talk about, this is kind of in the hands of your clients. Initially, in order to strike the right tone, you’ll need to talk about what matters to them. For that reason, it is important that you do your research on your ideal client. You know what matters to your clients and understand why these things matter.

This does not mean that you can’t talk about different things later on. In fact, one of the greatest advantages of being a thought leader is that you’ll get to eventually shape the conversation by offering different insights and new opinions. This will only work once you have demonstrated that you’ve got your finger on the pulse, however.

Finally, where are you going to express yourself? The most common method is blogging. This is a popular option because a blog article doesn’t always have to be written by the same person. It can even be written by a team. Quite often thought leaders will be supported by editors or even ghost writers.

Just because blog posts are the preferred method doesn’t mean you can’t use other formats, however. You might prefer video (many do), podcasts or any other format that suits your business well. It’s a good idea to have a combination of different types of content so you can appeal to a wider audience.

How to get started

The best way to get started in thought leadership is to get into conversations with other thought leaders. If you already know your way around in the coaching industry, then the best strategy is to participate in networking events – be they conventions or more private affairs – so that you can jump start your outreach.

Of course, if this is the strategy you’re going to pursue you want to make sure there is actually some content already out there. This matters, because if you get interviewed somewhere or you give a presentation, the hope is that people end up interested in what you have to say and looking for more. Obviously, that will only work if there is actually more for them to find.

So it is important there is some content already available. Note, creating this type of content can be quite demanding initially. This is largely down to the need to find a suitable voice and way of engaging with your audience. After all, communication is a skill, which means it can be learned. For that reason, don’t be afraid to get professional help to begin with. This might cost money, but it will help make sure you avoid the common pitfalls.

After all, you only get one chance to make a first impression. So make sure it’s a good one.

Being a thought leader means not only being able to define your brand, but – to some extent – the coaching industry. You can help set the tone, shape the content and lead what the discussion is about. What’s more, if you’re one of the thought leaders in your industry, your influence gets associated with your brand and will garner a ton of interest. And that’s a good place to be.

Chris Mercer, pro writer, developer and founder of Citatior, a powerful academic formatting tool for the students. Follow Chris on LinkedIn or Pinterest.