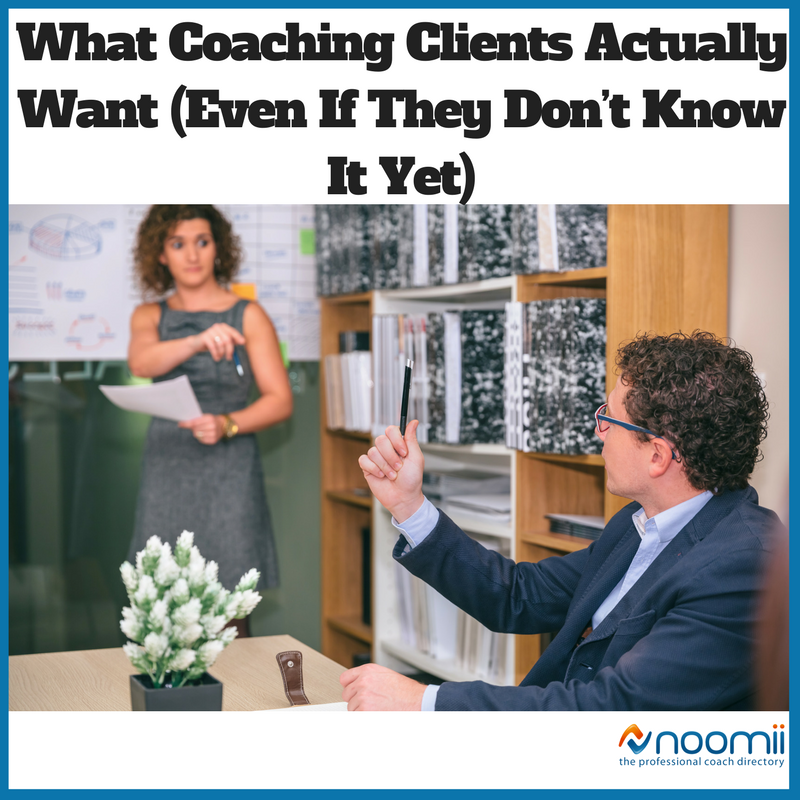 This is a guest post written by Catherine Wood. Want to contribute? Check out the 2017 publishing calendar.

Many clients enter into coaching thinking that they want their coach to take control of changing their lives. If a person who wants to lose 40 pounds is considering hiring a life coach, they may imagine that a coach would be the driving force to come down hard on them until they reached their goals.

Client: “I’m thinking about taking a two-week trip to Europe. What do you think—should I go or wait for another time?”

This black and white exchange of a coach telling his or her client what they should or shouldn’t do is a common misconception that is the far from the reality of what people actually want (and get) out of life coaching.

Coaching clients actually want to regain control of their own decisions

As pleasant as it may sound to hire someone to take away the responsibility in difficult decision-making processes, deep down we all know that this type of solution for reducing stress is not practical or possible without ending up even unhappier in the end. The truth of the matter (although many considering life coaching may not realize it at first) is that clients are desperate to find out what it will take to be in control of their own lives and their own goals and dreams.

How many times have you heard (or said) the following phrases:

The moment that clients start getting what they actually want out of coaching is the moment that they realize they have signed up to acquire the tools to change their own lives. This is also the point that coaching really starts to work—the realization and ownership of the fact that each and every one of us is in complete control of our own life and the way that it goes.

…But how does this shift take place?

For example, take the story of my client (we’ll call him Rob) who entered into coaching with a goal of shedding 30 pounds by the end of the year. He acknowledged that one of the biggest roadblocks standing in the way of his success was a lifelong habit of late-night snacking.

He knew that conquering this habit was the most essential step toward completing his goal, but the late-night snacking had such a tight grip on him that—more often than not—he felt powerless to win the inner battle each evening when the intellectual voice that told him not to give in withered against the dominance of his cravings.

He tried everything. One week, he even covered his kitchen counters and cabinets with post-it notes reminding him of his goals, but it was to no avail.

We ended up on a coaching call where Rob was expressing his frustration about his inability to control himself. This led to a conversation about incorporating consequences as an accountability structure in order to help him keep his word to himself, which was that he would stop snacking after 11pm.

Why wasn’t Rob getting the results he wanted out of coaching?

Why was Rob making commitments to himself around outcomes that truly mattered to him, but then breaking those promises almost every day?

This was happening because it was all part of the coaching process leading up to a breakthrough epiphany. Rob was waiting and wishing for coaching to change him because he had not yet realized that he—as a matter of FACT—did possess the power to change himself and defeat his unwanted habit of late-night snacking.

That day on our coaching call, we talked about creating accountability structures that are sufficient to overcoming your level of resistance to NOT take on the required actions to meet or exceed your goal. In other words, I talked with Rob about the need to build an accountability structure that was 1,000 times stronger than any temptation to break his promise to himself around late-night snacking. I shared some examples of effective consequences that I’d seen others use, and he came up with the following idea:

“I will donate $25 to the Republican National Committee for every evening that I snack after 11pm.”

Given the fact that Rob is a staunch democrat, I was intrigued and I have to admit that I thought about him frequently throughout the next week as I waited with curiosity to hear how his health project was progressing.

During our next coaching call, the moment of truth arrive and Rob shared that he hadn’t fully succeeded.

“Catherine, I snacked four evenings last week, and I simply cannot fathom contributing to the RNC and being put on their mailing list, so I have set up a contribution in the amount of $100 to The Nature Conservancy.”

What can a coach do when accountability structures fail?

In that fateful moment, I had a crucial decision to make as a coach.

That day, I noticed that Rob had allowed his consequence to disempower him. By shirking his responsibility to fulfill the consequence that he prescribed for his actions, he was totally letting himself off the hook instead of honoring his commitment to his goals.

As a coach, this kind of situation causes doubts and fears to surface. Sometimes I get taken aback by it and have to remind myself that the conversation has nothing to do with me and what I want my client to do but that it has EVERYTHING to do with what he said he’d do and holding him to that.

So, instead of letting Rob let himself off the hook, I set aside my own fear and chose to come from a place of empowerment instead. Here is what I said to him:

“Hey, I notice that’s not what you said you’d do, and by letting yourself off the hook from having to be with the consequences of your actions, that actually doesn’t work. Our intention is to strengthen your relationship to your word so that when you say you’ll do something, you trust yourself completely to be and do what it takes in order to fulfill on your declaration. What do you see?”

Rob thought, and he contemplated, and ultimately he agreed with what I said. So, on that fateful client call Rob donated $100 to the RNC and was entirely empowered by his choice.

And it didn’t stop there.

He attached the same consequence to two additional goals (including one for his business that he’d been avoiding for months) and the following week when we checked in on his practices, he had completed 100% of them.

So, what do coaching clients REALLY want?

Clients want a coach that will:

Yes, as a coach I get scared to do these things, but each time I put down that fear and say the bold thing in service of them, I am reminded of how powerful this work is.

Do you notice areas in your life that you are allowing reasons, justifications, and circumstances to stand in your way one more time?

Are you willing to put those excuses aside to practice like Rob did and create an accountability structure that is sufficient to overpowering your resistance to getting what you want?

Catherine A. Wood is the Founder and Head Coach of Unbounded Potential, a personal coaching firm dedicated to helping high performance individuals who are committed to making a big impact in the world. She helps them fall in love with themselves first so they can take bolder actions, push past their fears, and get bigger results in the direction of their dreams. Visit her website or connect with her on Instagram.

Alan Potts over 4 years ago

Stevey McGeown over 4 years ago

Hi, I liked this post. Really interesting and enduring blog. So many different perspectives on problems that keep coming up.